When I was being abused, I took out my anger and frustration through my drawings – primarily using the colors red and black. Art became my escape and my early drawings demonstrated the rage and fear burning inside me like a never ending fire of burning tires. 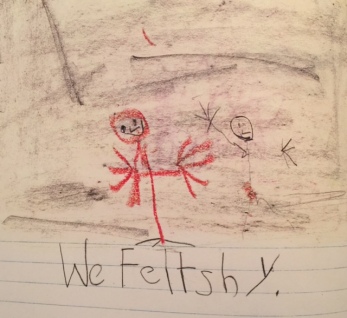 As I grew older I started to focus on different characters, and found a form of relaxation when drawing and creating something new. Drawing seemed to calm me. My subjects were usually cute animals or science fiction characters. In grade 5 I created what I thought was a very good drawing of the Starship Enterprise. By grade 7 I was very proud of my Boba Fett rendition. I started to think that perhaps drawing was going to be something I would do professionally. There was something exhilarating about picking up a pencil, sharpening it and putting it to the crisp white paper in my sketchbook. Sometimes I knew where my drawing was going to take me, but often I let the pencil wander on the page, and it created some magical things. Minutes and hours passed quickly when I escaped into my imagination. Errors or imperfections did not matter. What did matter was that I was taking time to be with me, and that calmed me and gave me a sense of control and power that I had not been able to attain when I was enduring the years of abuse at the private school. I loved creating images from my imagination and from my favourite shows. Drawing and creating made me happy.

When I entered high school I developed some characters that eventually became regulars in the school newsletter. I created a polar bear character that represented the mascot of the school, since the school’s team was named the Polars. My best friend and I drew characters together and we enjoyed sharing our own versions of comics we created. We talked about companies we could create together and storylines we could collaborate on. My high school life was starting to feel pretty good and I was starting to feel somewhat good about myself. My art was important to me.

Then I became sick.

I won’t go into details about my illness, but I missed over a month of school recovering. Upon my return to school I learned that my services for the school newsletter were no longer required. In my absence the artwork was taken over by my best friend. His new character, a koala bear replaced my whimsical polar bear. His bear was more developed and, to be honest, it was drawn with more care and attention to my bear. The bear, and other characters he drew, were much better received by all of our friends. His drawings were way more professional and he was more talented than I. The vice principal loved his work and called me into his office to tell me that I was no longer needed to provide artwork for the school. My best friend had filled in for me during my illness, and his work won over the school and teacher population. What made it hard for me is that I had to agree. He worried that I was going to be mad, and I assured him that I didn’t care. I did.

I never told him how betrayed I felt. I know he did not intend for things to happen the way they did. I was a teenager and it was difficult for me to rise above the petty jealousy I felt towards him. He had it all together. I felt very much like Salieri to his Mozart. I remember taking my drawings and burning them in my fireplace. I hated my feeble attempts at art. I did not see the good, nor the progress of my art, but instead only could see the scribbling of failure and mediocrity. Years of my childhood concentration and imagination were destroyed within seconds of my succumbing to my petty jealousies and feelings of inferiority. I was still emotionally bleeding from the years of abuse, but my cries for help and for want of love and acceptance were often in silence and carefully let out when I knew there was no chance of being rescued. It would be years before I picked up a pencil to draw again.

The resurrection of my artistic endeavours came almost five years later. I took a sketchbook with me to England when I started studying there. It remained untouched for almost a year. When I finally did open it to draw it was when I felt an urge to create something. We were working on Guys and Dolls, and I was playing Sky Masterson. My love interest was another student – Elvina Ibru. I am writing her name here because of who I later found out she was. It turns out (and you can Google her) Elvina is literally the Princess of Nigeria. She and I were friends at drama school, and she was an incredibly funny and wonderful friend during my time in England. Anyway, she played Sarah Brown. It was an honour for me to sing with her. One night as I sat in my flat on Radipole Road I saw my sketchbook and drew for the first time in six years. I did not even start to draw on the first page, but rather somewhere in the middle of the book in case anyone was to look at it. The drawing was my imagination of how Sky Masterson should have looked in the show. I looked nothing like the character I drew, but as my pencil found its way around the page, my visualization of the character slowly came out. It is far from a professional drawing, but I am adding it here so you can see what happened after six years of drawing dormancy: 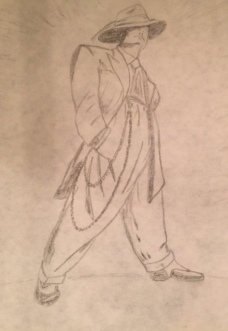 This drawing would remain safely hidden among the blank pages, never to be seen – until now. Over the years I would draw when I felt like it. My drawings are far from professional, and I do not draw with the same desire to be an artist as I once did. My drawings are often imitations of pictures I see that interest me – I am a copycat artist I guess. I still use the same sketchbook I used in England, and draw so little that there are many pages yet untouched. Slowly, I am getting back on the drawing horse, so to speak. I was recently happy with my attempts at drawing (copying the art of James Hance) a rendition of Winnie the Pooh as Star Wars Characters. I thought my imitation was not bad and so I posted it:

Not bad – not good, but still not embarrassing as I thought it may be. A friend asked me to draw Kanga as a Tauntaun – well actually asked me to please not do so. I felt something in my stomach. It was that churning that happens when you find yourself on the end of a high-diving board and you look over the edge to the water far below. It’s a big drop, and though you are scared you feel the spark deep within taunting you to just do it. A sensation of fear and excitement culminate until you breathe in and give in to the feeling. I know it sounds crazy, but that’s how that challenge felt to me. I sat down with my pencil and paper – this time creating something new – not a copy of another artist, but my own interpretation. It was a wonderful, exhilarating and frightening experience. But I did it – I created something new. It has been years since I felt this way drawing something of my own. I mean, it was a combination of two previously existing creatures, but the formation and the setting were all mine. It is not a professional drawing, but it is mine – and I am happy to create again. I am not going to run out and start shopping for artist work, but there is a part of me that has once again awakened – an awakening of the artistic force inside of me. 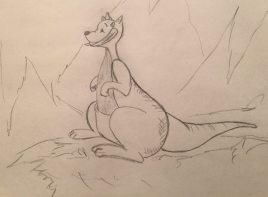 And now I think back to my friend from so many years ago. He never knew how I truly felt back then, nor how much drawing once had meant to me. As we no longer are in touch, I know he will never know. My anger and resentment towards him all those years ago are just more scars as I continue to heal from the past. Too many years have come between us, but I now accept responsibility for my feelings and my anger all those years ago. He knew nothing of the dark secret that was once inside me, and only now as I heal, do I realize how much power we give to our fear and to our insecurities.

Once again through healing has another door re-opened inside me. Once again I find myself doing an activity that calms me, excites me and challenges my imagination. I may not be a pro, but I am loving what I do for fun. My soul is learning to sing and I am excited for the continued journey of the Jedi within me is taking. Slow and steady I am learning to be one with the Force. The Force is love and May the Force be With You.